Obstacles towards the Elections 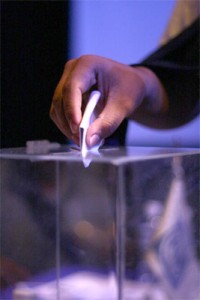 In Greece, after many months of rule of a government of doubtful constitutionality and at total variance with the will of Greek people, we were allowed to hold elections.

For these elections, on top of their regular state election funding of 54 million euros, the older political parties were funded with an extra 10 million euros. These parties, however, already owe 240 million euros in bank loans, an amount which is equal to their projected state funding over five years.

The Pirate Party of Greece is 3 months old, has 800 members and is competing in the same political arena as the parties above, bringing forward candidates in two-thirds of all Greek constituencies.
Since the Pirate Party does not receive any state funding, and its only income comes from member subscriptions and donations, we decided to apply the crowd-funding model in order to raise the necessary amount to be able to take part in these elections.
Indeed, 20 euros from each member, or 40 euros from half of them would be enough to cover our expenses for the elections, expenses which include the printing and shipping of the ballots (tasks for which parties are responsible).

After following all due legal procedures, we opened a bank account and began to collect member subscriptions (12 euros) and/or donations. By the morning of the 24th of April, we had collected about half of the 15,000 euros we would need to cover expenses.

Of course we didn’t take into account that the establishment always does its best to complicate the birth of anything new.

Paper for the ballots
In national elections, each party which has candidates in at least 1/3 of the country’s prefectures is entitled to free paper for printing their ballots, which the state provides.
The law also requires that 8 days before the elections (Friday night, 27/4 in this case), parties must have delivered the ballots to the offices of all prefectures in Greece.

So, lets see what happened:
1. We received the directive to collect the paper (dimensions: 70×100 cm) on the morning of Tuesday, April 24.
9,000,000 ballots must be printed and delivered to all prefectures by the 27th of April.
2. The warehouse opened at 15:00 of the 24th of April, but there were only 70-80 pallets of paper, when each party needs approximately 50 pallets for nationwide coverage. (There was a truck which would leave and go somewhere, then return after an hour, with more pallets).
3. There was no 70×100 cm paper, which are the legally specified dimensions, and we were presented with 86X61 cm paper. The 70×100 cm paper was given to the old parties, those with the most state funding, so they could print cheaply.
On the contrary, with the wrong size paper, we need to perform about 40% more passes through the press, which results in a corresponding 40% increase in printing costs for our ballots.
4. Finally, at around 17:30, we received the paper, however by that time we were no longer able to ship to our printer the same day.

Eventually, we started printing. Deadlines are of course impossible to meet. The Ministry of Internal Affairs published a statement saying that due to  the“lack of time”, the prefectures are to receive the ballots even after the legal deadline, for a «reasonable period of time», without specifying, however, how much time is considered reasonable. So, every prefecture applies a different deadline!
Employees of the prefecture of Attica for example decided that a reasonable period of time is until Sunday, the 29th. The vice-prefect of the prefecture of Rhodes, on the other hand, has decided to strictly adhere to the legal deadlines and will not accept ballots past the official deadline, i.e. Friday the 27th.

Ban on e-banking!
On Tuesday, 24th of April, we received an urgent message from our bank, that the banks’ administration decided, without any previous communication with the Parliament’s Political Parties’ Audit Committee (as we discovered after a recent telephone communication with the head of the Committee, Mrs Tsana), all transfers of funds via the interbanking system and via web banking fare blocked or political party bank accounts, because it is not possible to accurately determine the identity of the person making the deposits.
Therefore, anyone who wants to make a contribution to a political party is required to go in person to a bank which maintains the party’s account, in order to make their donation, with mandatory disclosure of their identity and showing of their I.D.card. Hence, it is now impossible for anyone without direct access to a branch of a bank which hosts an account for the party (for example for all the many Greeks who live abroad) to make a donation, while at the same time the bank maintains a database of all the members and friends of the party (!)
So for now, the only way to support the Pirate Party of Greece is by an in-person transaction at the bank, within Greece.

Television exclusion
There is a law that determines how much time each political party is entitled to for advertisements on national television. However, the Pirate Party of Greece is excluded from this process along with all  other new parties. Parliamentary democracy in Greece does its best to prevent any new effort and to thwart any attempt to change the situation in the country.

Why do they fear the Pirates?
It is clear that the game is not played on equal terms.
The political establishment is doing everything in its power to prevent change, but change is inevitable.
We, Pirates, declare that the difficulties we are facing won’t disappoint or deter us. On the contrary, they motivate us to fight to establish a real democracy, with equal opportunities for everyone.

It is more than evident that, while the people of Greece are demanding political change, the current political establishment is frantically, but unsuccessfully, trying to maintain the status quo.